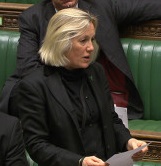 Local MP Tessa Munt has secured permission from the Speaker of the House of Commons for a debate on Somerset Children’s Centres which are under threat from the leadership at Somerset County Council. It will take place during the evening of Monday the 3rd February.

After receiving a considerable number of emails, letters and surgery visits in local towns and villages about this matter, Tessa is extremely concerned about the future of Children’s Centres in Somerset. One of those under threat in her area is Cheddar Children’s Centre.

Some parents and carers have reported that they first heard of planned closures through other parents, that their questions to the County Council have been ignored by the Councillor responsible and that staff have been reportedly “gagged” and are directing all enquiries to County Hall. When a member of Tessa’s team contacted the county council he was directed to the Council website which wasn’t helpful as it has not been updated since 13th November 2013.

It’s rumoured that services will be centralised but Tessa said this was “hopeless” for families who have to rely on inadequate and overpriced public transport. This means that even if they are able to reach the nearest centre they may not be able to get back to their town or village in time to collect other children from school.

“Despite holding the Children and Families brief at County Hall until just 18 months ago the Leader of Council Mr Osman seems not to understand the difficulties faced by families in rural areas like Cheddar and the surrounding villages.

I am hopeful that the forthcoming debate will allow open discussion of these difficulties and provoke the leader of the County Council into keeping Children’s Centres open, adequately staffed and accessible.