Vince Cable talks about the our apprenticeship revolution 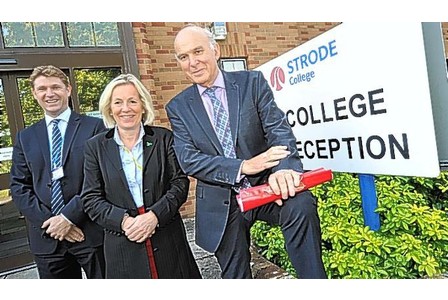 Liberal Democrat Business Secretary Vince Cable has written about apprenticeships, Somerset and my work as your MP ahead of the General Election.

My goal is to ensure all young people have two equally attractive routes to a rewarding career – either going to university or doing an apprenticeship up to and including degree level training.

During the past five years, Liberal Democrats have overseen an apprenticeships' revolution, increasing the range and quality of apprenticeships and challenging the outdated perception that vocational education is somehow inferior to a university degree.

Achieving parity of esteem and protecting the funding for adult learning is a deeply personal campaign for me. I've campaigned to ensure apprenticeships are seen - and talked about - as equally as impressive and rewarding as a university degree, whether in terms of the rigour, challenge or earnings potential.

One of my proudest achievements as a Liberal Democrat Minister, besides standing up to George Osborne and the big bank bosses (although that was satisfying) was defending adult education and the half million plus 'second chance' adult learners.

The adult education budget costs a fraction of that for universities. But I am constantly being urged by Treasury mandarins to cut it. They say: "adult learners won't riot like middle class university students. Unlike Vice Chancellors and Nobel Prize Winners, they won't write critical letters to the Times." But that's not the point. I know how invaluable and important adult education is.

My mother left school at 15 to work on a production line in a chocolate factory. Whilst managing the household, she had a nervous breakdown and was sent to a mental hospital. When she came out, she eventually cured herself through learning at the city's adult college. In time, she learnt enough about history and art to guide visitors around York Minster.

It's true, my mother wouldn't have rioted. But I won't allow that ladder to be pulled away from those who want to seize opportunity, progress in life from a difficult start or deserve a second chance, like her.

Adult colleges are at the forefront of another major part of our skills revolution. Thanks to pressure from Liberal Democrats, this government has been able to double the number of apprenticeships over the last five years and improve their quality, despite enduring a time of austerity. Last year, in my colleague Tessa Munt's Somerset patch, 1,590 apprentices started – up from 880 in 2009. I met some of those apprentices when visiting Strode College in Street and local businesses with Tessa, all doing a really good job providing opportunities and choice for local young people. Tessa's enthusiasm for our revolution in apprenticeships has been invaluable.

My colleagues and I were particularly impressed to hear about Tessa's novel approach to fact-finding with her own wide range of apprenticeship days, clocking up hours in local business including a cider mill, a bakery and in a reclamation yard.

Businesses, consumers and young people are now recognising the significant opportunities that apprenticeships can offer. In December last year, another highlight as Business Secretary was celebrating the two millionth apprenticeship. Sixteen-year-old Paige, who marked this milestone and whom I met in Oxford, is being trained to design and manufacture advanced instruments for scientific research, as part of her higher apprenticeship.

She now has the opportunity to progress to a degree level qualification while learning on the job. For me, the apprentice agenda is about quality as much as quantity. Employers have taken the lead in setting simpler but more rigorous standards for apprenticeships in their own sectors. There are now clear expectations for apprentices embarking on careers as aircraft fitters, electricians, paralegals, butchers, dental technicians and in more than 70 other fields – with demanding tests and tough grading along the way.

I want more companies to derive the benefits from offering high-quality training of this kind; 96 per cent of employers who've hired an apprentice believe their business has profited. This is just as true of small family firms as it is of Jaguar Land Rover, Airbus or British Telecom. We are simplifying apprenticeship funding to bring more small and medium-sized companies on board.

This is happening in Somerset. Strode College has been training NVQ Level Three apprentices alongside local company Party Packs of Westbury-sub-Mendip. Kate Turner, who set up Party Packs in 1986, said:

"apprenticeships make a real difference to our business. They have benefits for both the young people and business owners like me, and we are glad to have the support of our local college, Strode. One of the real differences we see in our apprentices is the self-confidence gained over a year of going to work and College. Our small business certainly offers variety and a wide range of tasks – from being in the office to working in the distribution centre – and our apprentices see every aspect of our business, which supports their qualifications in Business Administration. We're very pleased that one of our apprentices, Lizzie, will be staying on with the firm after she finishes her apprenticeship."

In the next parliament, the Liberal Democrats would commit to doubling the number of businesses offering apprenticeships, in part by extending them to new sectors of our economy, like the creative and digital industries.

But, this isn't simply a numbers game; it's important that the apprenticeships we create teach valuable and relevant skills and expertise. To help support this expansion, the Liberal Democrats would tweak the funding mechanism to further reward firms that train. To secure the high level vocational skills that businesses need, we also propose to develop our specialist National Colleges as centres of expertise where there is demand and an identified need. These would represent a modern version of polytechnics and could typically involve partnerships with existing FE colleges.

Liberal Democrats in the next government will seek to ensure these opportunities are open to all, working with the Apprenticeship Advisory Group to increase the numbers coming from BAME backgrounds, ensure gender balance across industry sectors, and encourage under-represented groups to apply for apprenticeships. We will also improve provision of independent careers information, advice and guidance for all, through the National Careers Service.

Apprentices make a vital contribution to the local economy, boost business productivity and give people the skills they need to get on in the world of work. There is objective analysis which supports that apprenticeships typically yield £18 of benefit for every £1 spent; benefit the apprentices, the company which invests in apprenticeships and the wider economy.

As we celebrate National Apprenticeships Week 2015, I am enormously proud of the opportunities we've created for people to gain the skills to get ahead. From accountancy to pharmacy, fashion design to software design, engineering to police work, we've supported thousands of businesses, big and small, to grow and compete by developing apprenticeship training.

I hope to continue this work with committed colleagues like Tessa Munt as part of the next government.