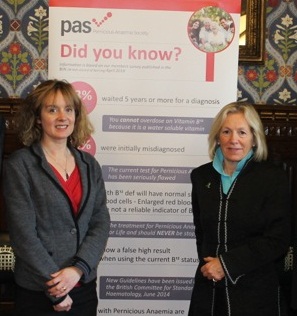 Local businesswoman Louise Jones travelled up to Parliament to meet with Tessa at the Parliamentary reception for the Pernicious Anaemia Society.

The event was held to raise awareness of the problems with the diagnosis and treatment of the most common cause of severe Vitamin B12 deficiency - Pernicious Anaemia - a condition Louise has lived with for seven years.

Patients are routinely misdiagnosed as suffering from ME, depression, Multiple Sclerosis and hypochondria.  Left untreated, Pernicious Anaemia leads to severe and irreversible nerve damage, so an early and correct diagnosis is essential.

A recently published survey showed that 21% of those with Pernicious Anaemia waited over two years for a correct diagnosis, 19% waited over five years and a staggering 14% waited over ten years to be told the reason for their symptoms.  These can include continual tiredness, lack of concentration, severe mood swings, irrational behaviour and shortage of breath.

Louise considers herself "lucky" to have been diagnosed quickly and, thanks to the support of the Society and a doctor who took the time to listen, she got the treatment she needed to stay healthy.  However, many others are not as lucky, and are either not being diagnosed or are failing to receive the treatment they need - with some suffering devastating consequences as a result.

The PA Society has also raised concerns about treatment following diagnosis.  Almost two-thirds of patients are unhappy with their current treatment, which can mean they by-pass their health professionals and seek potentially dangerous alternative sources of replacement B12.  10% of PA Society members use a form of B12 not licensed in Europe or North America.

“I was very pleased to meet Tessa at the presentation given by the Pernicious Anaemia Society.  With an estimated 10% of the UK population deficient in B12, it is vital that the current regime for diagnosing and treating Pernicious Anaemia and B12 deficiency is reviewed and improved.  Having the support of MPs such as Tessa will help sufferers achieve this.”