Tessa served as Vice-Chair of the All-Party Parliamentary Group (APPG) on Anti-Corruption from 2011 - 2015 and she had agreed to continue with this role, if she had been re-elected as MP for Wells.

During this time she has been a vocal and active member of the APPG, calling government, companies and investors to account for their role in facilitating and failing to prevent corruption.

This week we have learnt how the super rich are able to stash their cash off shore and avoid paying tax like the rest of us. Tessa called for a register of beneficial ownership, which if properly implemented would stop this practice back in 2013.

Most recently she questioned the Foreign Office and the Church of England's Commissioners about allegations which stemmed from investigations by Global Witness and Human Rights Watch in 2014 that Soco International, a UK-registered oil exploration firm had made illicit payments and appeared to have paid off armed rebels as they sought access to Africa’s oldest national park for oil exploration.

Virunga, a National Park and UNESCO World Heritage Site in Eastern Democratic Republic of Congo, is under threat from drilling, activity that would destroy the biodiversity of the park which is home to some of the world's last remaining mountain gorillas.

As a result of Tessa’s interventions, the Church of England, an investor in Soco International, has demanded that the company launch an independent investigation into the corruption and human rights allegations.

Under questioning from Tessa the Foreign Office voiced its support for the park, stating that: “ the people who live there must be protected, and its rich biodiversity must be protected for future generations. We support the alternative vision for Virunga, which emphasises such enterprises as sustainable fisheries, eco-tourism and small-scale hydropower”.

In 2014, a film 'Virunga the Movie' was made to raise public awareness of this issue, you can view the trailer below:

Further information on Tessa's work on the APPG

Tessa has been a vocal champion for the campaign to end corporate secrecy, calling for legislation to require UK companies to publish who their ultimate owners really are – a measure designed to lift the secrecy that has for years enabled anonymous companies to hide the proceeds of corruption, evade tax, and harbour stolen assets safe in the knowledge that even the police will find it very difficult to trace them.

The coalition government passed the Small Business, Enterprise, and Employment Act (2015) which contains just such a measure. From 2017 an open public register of ‘persons of significant control’ will ensure that the corrupt can no longer hide their ill-gotten gains in anonymous companies registered in the UK. This is a significant success for the APPG and the civil society campaigns that have been pushing for corporate transparency since the G8 in 2010.

Many companies and individuals dodge taxes by keeping their money in a complex network of trusts and ‘shell’ firms, where companies are hidden inside each other without revealing their true origin and owners. These are often based in secretive tax havens. Secret company ownership makes most cases of large-scale corruption, criminal money-laundering and terrorist financing possible.

A World Bank review of 213 big corruption cases from 1980 to 2010 found that over 70% relied on anonymous shell entities.[1] Company service providers registered in the UK and its Crown Dependencies and Overseas Territories were second on the list in providing these shell entities.

The cost to developing countries of tax havens and illicit financial flows is staggering. It is estimated that between $21 - $32 trillion in private financial assets alone are held in tax havens -  approximately 25-30% of which originates from developing countries which may lose $120-$160 billion annually in lost tax revenue, a sum greater than the entire global aid budget.

Photo from May 2014 – Tessa supports the ‘EXPOSED’ campaign, drawing attention to the USD$1 trillion lost to corruption every year. 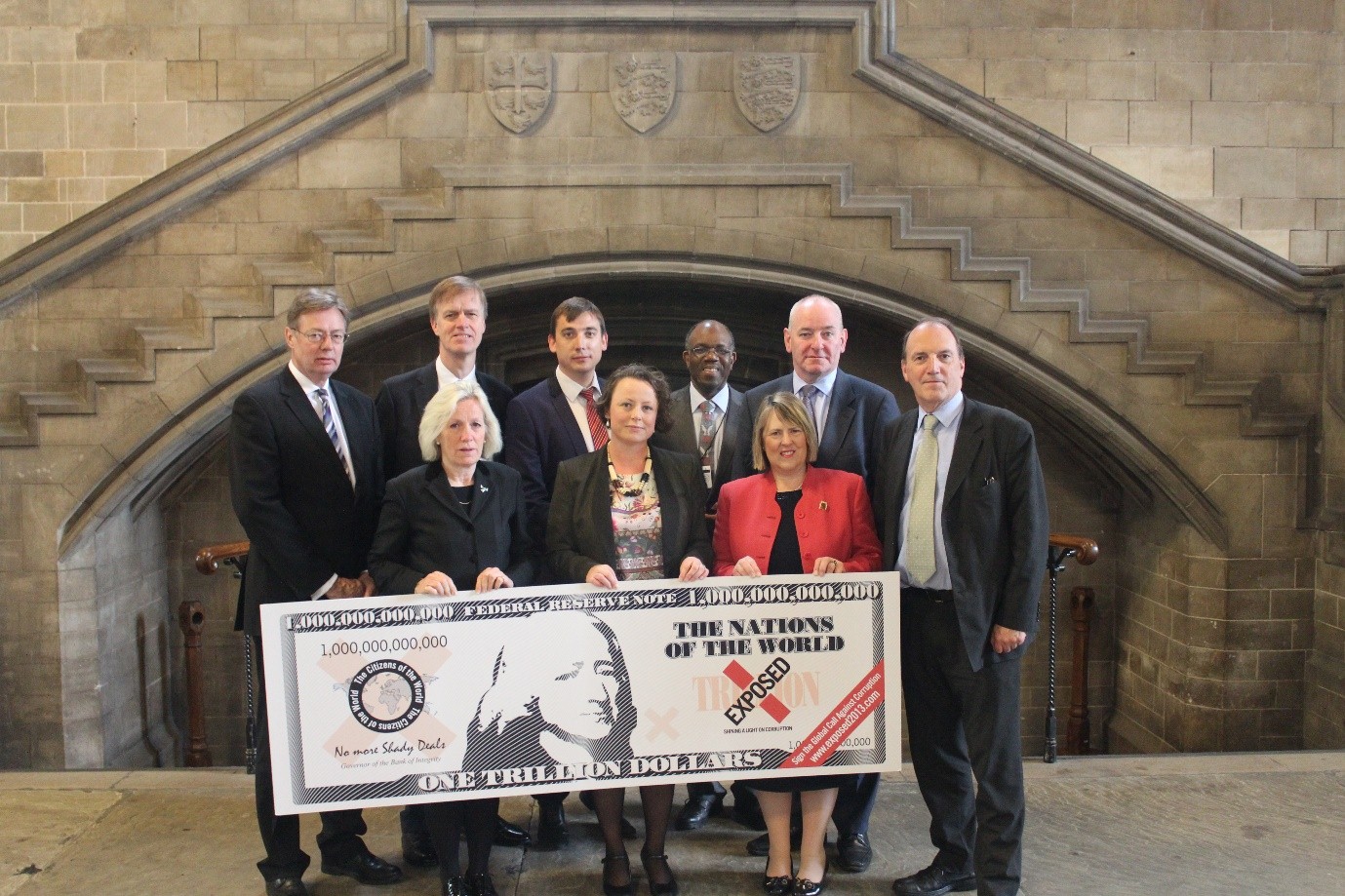